THANK YOU! to All Who Came to the HFHA Meeting 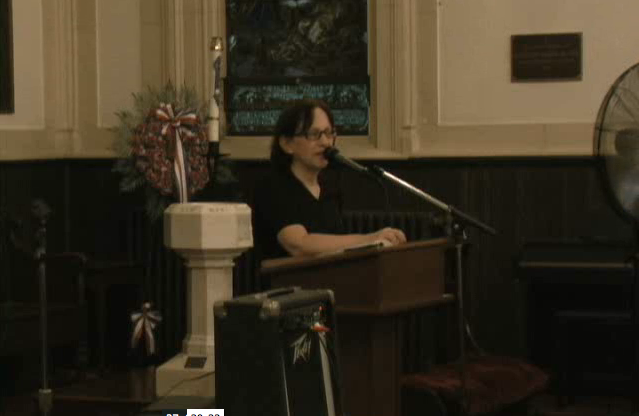 [[ UPDATE: The Hoboken Reporter in its August 18 issue ran a story by Dean DeChiaro that mischaracterized the nature of Thursday’s HFHA meeting, suggesting that the meeting was advertised as being SOLELY about the property revaluation:

“The meeting, held by the HFHA to bolster its ranks with election season appproaching, was advertised as an information session regarding the ongoing tax revaluation in Hoboken, which is currently being conducted by Appraisal Systems, Inc.”

The only public statement that wrongly presented the meeting as being EXCLUSIVELY about the reval was made by the Hoboken Reporter itself, in an announcement dated August 9th — perhaps from a misunderstanding, or from rushed deadlines, or both.

The Reporter article then implies that we corralled attendees to the meeting under false pretenses:

“Despite its stated purpose, the meeting quickly turned to the topic of rent control, an issue which dominated the political scene last year.”

A story on our meeting simply doesn’t warrent this kind of tone.

The article also focused — in a forced attempt at he-said-she-said false balance — on an anti-HFHA flyer handed out by someone on the street outside our meeting.

Then, remarkably, the story further muddles its facts by saying that:

“People claiming to be Hoboken residents displaced by Hurricane Sandy filled out these [provisional] ballots and sent them in, but the displacements could not be proven.”

This is a reference to the completely fraudulent list of 114 so-called “displaced voters” asserted by plaintiff MSTA’s attorney Charles Gormally, who produced this list of names with no sources, no voter-affirmation statements, and no evidence whatsoever.

(The voters, of course, are real.  What’s fraudulent is Gormally’s unbacked assertion — and the trial judge’s acceptance of that assertion — that those voters should have been able to vote on a local question, Hoboken Public Question # 2 — the rent-control question — when voting outside of Hoboken.)

This group of very real voters did not claim to be Hoboken residents at all, and they did not, they could not, vote on HPQ#2 — the rent-control question.

Gormally simply took from the voter rolls a batch of names of folks who voted outside of town, and handed those names to a mysteriously uncritical and sympathetic judge who then “set aside” the results of the election.  That decision is now on appeal.

Most of the real people behind those names were in fact not Hoboken residents at the time of the November 2012 election.

How do we know this?

These were statements made by the voters at the time they cast their provisional ballot.  We also obtained certified statements from many of the remaining voters (for whom the county board of elections had no affirmation statements) of their true (mostly pro-rent-control) voting intent.

The vast majority of the voters on this list, then (and more, obviously, than 52, the number of votes by which the election was won), said in their affirmation (or other certified) statement that they did not live in Hoboken.

This collection of voter-affirmation and certified statements was among the evidence that we were denied from presenting to the trial court, and which now will be taken into consideration at the appellate level.

We urge everyone to be extremely wary of the truthfulness or trustworthiness of anything said by MSTA’s representatives.

Their goals are very simple:

They ultimately want every rental unit in town to cost tenants $2500 a month or more;

They want to decimate any trace of rent control; and

they want to drive the middle class and the working poor out of Hoboken.

If there’s one thing they’ve already proven, it’s that they’ll stop at no lie or deception — at nothing — to try to reach those goals.

In any event, we’re disappointed that the August 18 Hoboken Reporter piece contains the inaccuracies we’ve mentioned above.  We hope the Reporter will offer a retraction, correction and clarification of these inaccuracies soon. ]]

We had a far larger turn-out than expected, and we thank everyone who joined and made donations.  The movement of concerned and aware tenants in Hoboken has grown a great deal over the past year, and it continues to grow.

We also want to extend an enormous thank you to our speakers Renee Steinhagen, Flavio Komuves, and Matt Shapiro.

For links to important articles and a video about why a homeowners’ group in Princeton sued the reval company, ASI (yes, the same company that’s doing the Hoboken reval), read our previous post, below.

We now have a video of the meeting up on our Vimeo page which includes opening remarks from Cheryl and the talk by Renee Steinhagen and Flavio Komuves.

Part 2 of the video has Matt Shapiro’s talk, introduced by HFHA member RJ, who also makes an appeal for membership contributions.  Matt Shapiro is President of NJTO, the New Jersey Tenants Organization.

Stay tuned for updates:  We’ll have news on our appeal of the election within a week.

(You can read the briefs:  They lay out the long & tortured history of this case, and they’re available as PDF downloads in our previous post, below.)

Meanwhile, HFHA has more events planned.  If you can volunteer to help, please get in touch with us.

You’ll have the distinct pleasure of knowing you’re sticking it to the developer man.

But remember:  We need YOU, and your neighbors, and your friends, to help us  become a strong voice and to build a strong movement.