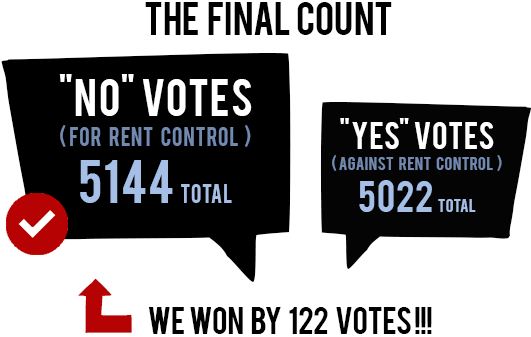 ONCE AGAIN, Hoboken’s longstanding rent-control protections have withstood the latest assault by MSTA (“Mile Square Taxpayers Association,” for anyone who might still not be familiar with that acronym), the developers’ political action group that is intent on wiping away any restrictions on how high landlords can raise rents on their properties in Hoboken.

Click here to read the entire amendment proposed by the MSTA.

In an age of the 15-minute memory, it’s useful for us all to recap the events leading up to this second electoral defense of rent control in as many years against an attack by an operation that has made a profession of decimating rent control regulations in various municipalities throughout the state of New Jersey.

It’s important to make note of how a special-interest group has been draining the resources of Hoboken as it mounts its attacks on the city’s social structure.
It’s important to remember because they will do it again.

In recent years MSTA has been aggressively attacking rent control using a range of political, legal, and extra-legal tactics.

A few years back it was lawsuits against the City of Hoboken (including a class-action suit against the city, which MSTA lost) or against individual city council members, xn--ygba1c.cc tying up the city and its officials in expensive legal battles. (And then endlessly complaining about how the city is wasting its resources “on expensive litigation” while never saying that it was they themselves who were initiating this expensive litigation).

Then the group moved on to writing its own law (and its own ballot question, see below), filing it as an initiative to be voted on in a referendum (after the city council voted against it, causing the initiative to go to a vote) and then mounting a political campaign based primarily on misleading voters who want to support rent control into voting against their own interests. Their logic was that tenants outnumber landlords, so the way to win was to deceive tenants about what they were voting for.

Their strategy came very close to working. There’s a particularly deep kind of cynicism at work in mounting a campaign against people you feel such contempt for that you would try to deceive them into casting their votes for what they fear most.

MSTA’s incessant legal threats have intimidated city officials to the extent that no one (except HFHA) stood up to this litigious developers group as it hijacked the machinery of government and tried to rewrite the laws for itself.

In both last year’s election and this year’s court-ordered re-vote, hundreds of “yes” votes were bought and paid for by forces working for MSTA. But even this couldn’t win them either election. Without deception and vote-buying (which itself is an act of deception) they would never have come so close.

MSTA’s operatives went through many machinations to get wording on the ballot that would start by saying their proposal was “to keep rent control . . .” but then ultimately twisted the wording around so it ended up actually advocating the elimination of rent control.

In spite of the inherently deceptive nature of their campaign, one of MSTA’s justifications for promoting “vacancy decontrol” (which means when tenants move out they can raise the rent sky high) was that no landlord would ever improperly push out a tenant just because he could make a fortune by doing so. They were far too ethical for that, they said.

Yet they went ahead and overturned the election on the word of two ethically compromised judges and forced Hoboken to vote on it yet again this year.

Speaking of ethics, MSTA’s lack of them has very recently gotten its main operative, Ron Simoncini, into some deep trouble over in Neptune Township, NJ. Neptune has just instituted rent control, so Mr. Simoncini decided to insert himself into yet another town where he doesn’t live and doesn’t belong by trying to mount an anti-rent-control referendum. It turns out that at least a hundred of the signatures on the referendum’s petition sheets were forged. The matter is currently under investigation by the Monmouth County Prosecutor’s Office.

This is a very interesting case that we’ll be following closely, and which could have serious potential (as in criminal) consequences for Mr. Simoncini.

You can read more about it here, here and, most interestingly, here.

(You may, by the way, want to contact local press outlets and local blogs and ask them why no one here has reported on this story.)

Ask about the progress of the investigation.

Meanwhile, MSTA’s campaign in Hoboken had all the advantages of being massively funded by the people who stand to make a fortune out of turning Hoboken into a speculators’ playground. They had pockets deep enough to do whatever they wanted, to break any opponent in court and to finance almost any campaign tactics they could imagine.

MSTA’s campaign was manned by hired hands, most of whom had only the vaguest notion of what the ballot question was even about.

HFHA, by contrast, is comprised solely of volunteers.

Let it be remembered, because they will be back, perhaps under a new name or some other guise. And they will have still newer surprise tactics for us.